How I use regression weights to replicate research

In this post, I’ll give a quick demo of regression weights, looking at Cook (2014) (replication files) on the effect of racial violence on African American patents over 1870-1940. This paper starts with striking time series data on patents by African American inventors. In Figure 1, we see a big drop in black patents around 1900. What is driving this pattern? 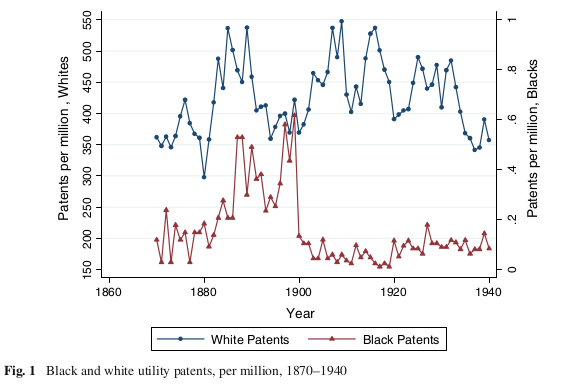 Cook argues that race riots and lynchings cause reduced patenting, directly by intimidating inventors, and indirectly by undermining trust in intellectual property laws (if the government won’t punish race rioters, why should you believe it’ll enforce your patents?).

Table 7 contains the main state-level regressions of patents on lynching rates and riots. Using a random-effects model, Cook finds negative effects for both lynchings and riots. I find similar results with a fixed effects model.

Let’s do regression weights, first for the lynching result. I regress lynchings on the other variables, grab the residuals, square them, then normalize by the sum of squared residuals.

Next, let’s see how these weights vary by region.

This is a bit surprising. The South has 81% of the weight, with the remainder coming from the West. The other three regions have basically zero contribution to the lynchings coefficient.

So let’s see what’s happening in the data.

It turns out that basically all lynchings occurred in the South and West, with zero in the Midwest and Northeast (and roughly zero in Mid-Atlantic). Given this, the regression weights make sense. When there’s no variation in a variable, it should contribute nothing to the regression. But because the Midwest and Northeast have data on the other covariates, they still add some information, which is why the weights aren’t exactly zero.

Next, let’s see the results for the effect of riots on patenting. First, the regression weights, regressing riots on the other controls:

Again, the regional patterns are surprising. This time, the South has 27% of the weight, and the Mid-Atlantic has 73%, with the other regions contributing nothing. What’s going on?

It turns out there are only 5 riots in the state-level data. Let’s dig deeper.

But wait. If you look, you’ll see that there are 35 riots in the time-series data.

Where did the other riots go? It looks like the state data just has a lot of missing observations, which would explain the missing riots. That is, the issue isn’t variables with missing values, but that most state-year observations do not even have a row in the data. (I emailed Cook to ask about this, but didn’t get a response.) As you can see, the sample size fluctuates over time; this is far from a balanced panel. 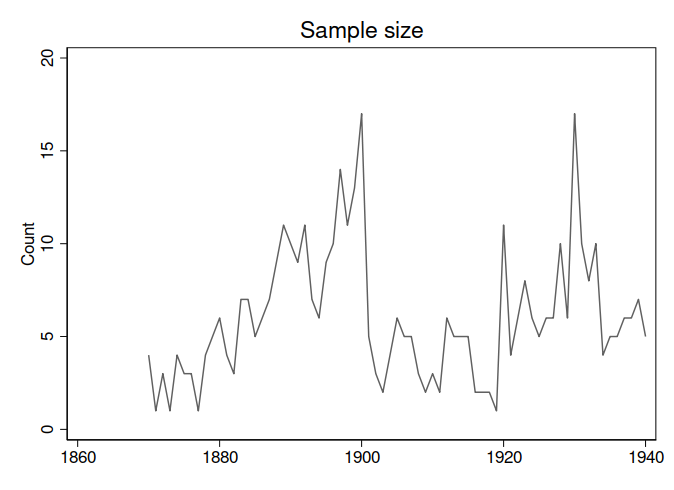 Note that 1917 and 1918 have the majority of the weight, but there are only two observations in each of those years.

The paper is not very clear about this. Table 5 reports the descriptive stats, but only has the riots variable for the time-series data, and not the state-level data. And Cook does not plot any of the raw state-level data, but instead jumps right into the regressions.

This seems like a serious problem for the riot results. The paper isn’t estimating the effect of riots on patenting; instead, it’s doing the effect of five specific riots. If we could collect data on the remaining 30 riots, I’d expect the estimate to change. In other words, why should we expect this result to be externally valid for other historical riots?

To sum up, regression weights are an easy way to dig into a paper and see exactly what’s driving their results.