Can we detect the effects of racial violence on patenting? Replicating Cook (2014)

A year ago, I wrote a short post looking at the data in Cook (2014) (sci-hub) (replication files) on the effect of racial violence on African American patents over 1870-1940. I discovered that the state-level panel data was strikingly imbalanced. With Lisa Cook in the news for being nominated to the Federal Reserve Board of Governors, I decided to revisit the paper more thoroughly. I find that the main time series result is not robust, and provide evidence that the panel data results are too noisy to be trusted.

Cook has two measures of patents per year: (1) using the year the patent was applied for, and (2) using the year the patent was granted. In the paper, Figure 1 reports Black (and white) patents per million using grant year, while Figure 2 shows Black patents per million using application year. Comparing the two graphs, we immediately see that the scale differs by a factor of about 10. Here I merge the two datasets and plot the application-year and grant-year variables on the same graph. 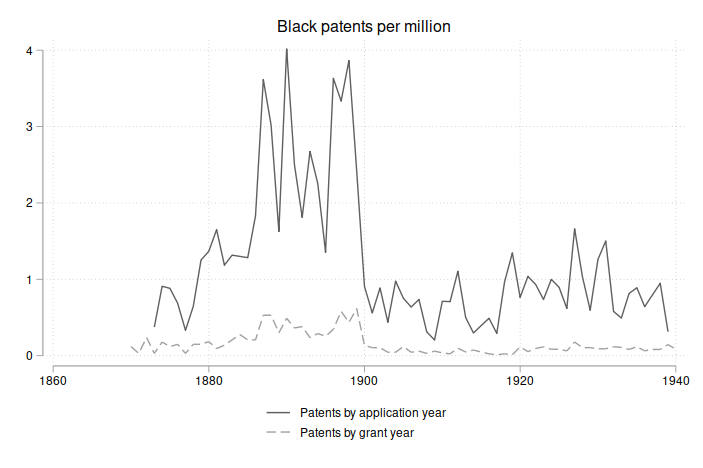 There is a huge discrepancy between the two patent variables. Cook collected data on 726 patents over 1870-1940, but the average by grant-year is 0.16, while the average by application-year is 1.22.1 2

Cook’s replication data does not include the raw patent or population variables, so we can’t say for sure what’s going on here. But the average Black population (see Table 1) was roughly 10 million, and 0.16 grant-year patents/M * 10M * 71 years = 114, far fewer than the 726 patents recorded. In contrast, 1.22 application-year patents/M * 10M * 71 years = 866, which is in the ballpark of 726. Speculating, one possible explanation is that Cook calculated grant-year patents using the white population (average 75 million) in the denominator, giving 0.16 * 75 * 71 = 852 patents.3 Hopefully Cook will publish the raw data and we can resolve this.

Table 6 uses time series data to estimate the effect of lynchings, riots, and segregations laws on patents. Column 1 uses race-year panel data, where the lynching and patent variables vary by race (but the riot and segregation law variables vary only by time). Columns 2 and 3 run time series regressions separately by race, allowing us to estimate differential effects of racial violence on patenting.

I am able to reproduce Table 64, using grant-year patents: 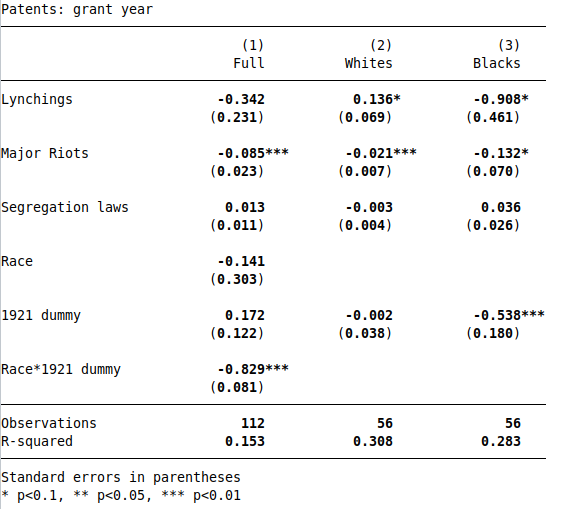 As noted in the paper, lynchings and riots have negative effects on Black patenting, and the 1921 dummy has a large negative effect, corresponding to the Tulsa Race Riot.

The application-year variable is missing in 1940, which reduces the sample size for the robustness check by 1. To make a pure comparison, I re-run the grant-year regressions dropping 1940, and get similar results (see footnote5). Next, I run Table 6 using application-year patents: 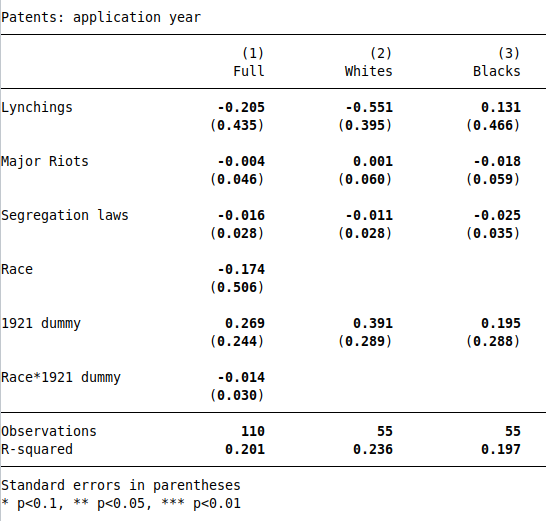 And the pattern of missing data is not random. Below I plot the number of observations by state and year. First, we see that the majority of states have fewer than 10 observations over 71 years. 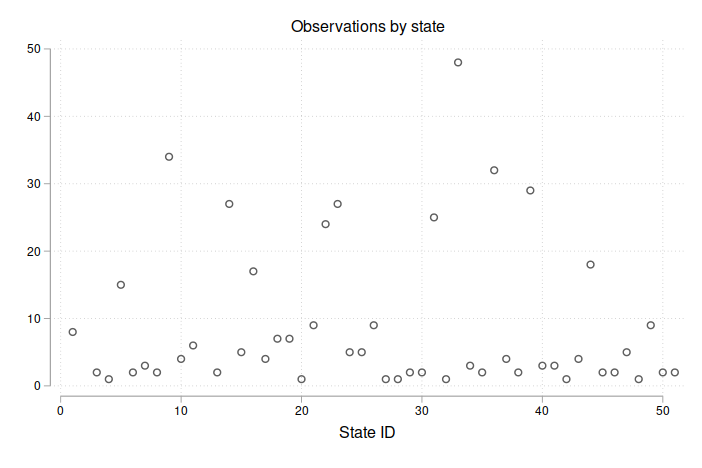 Next, the sample size is increasing up to 1900 before dropping off and rising again starting in 1920. 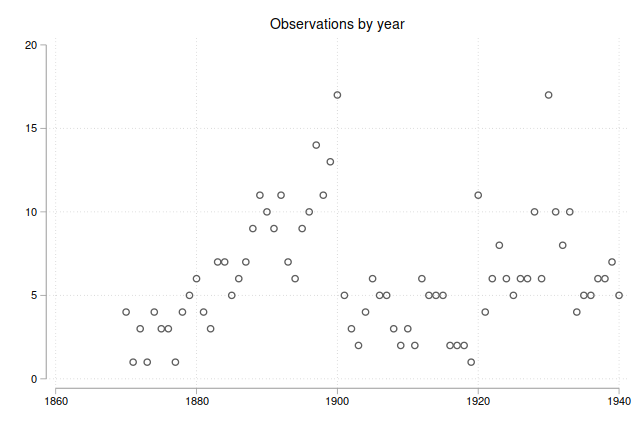 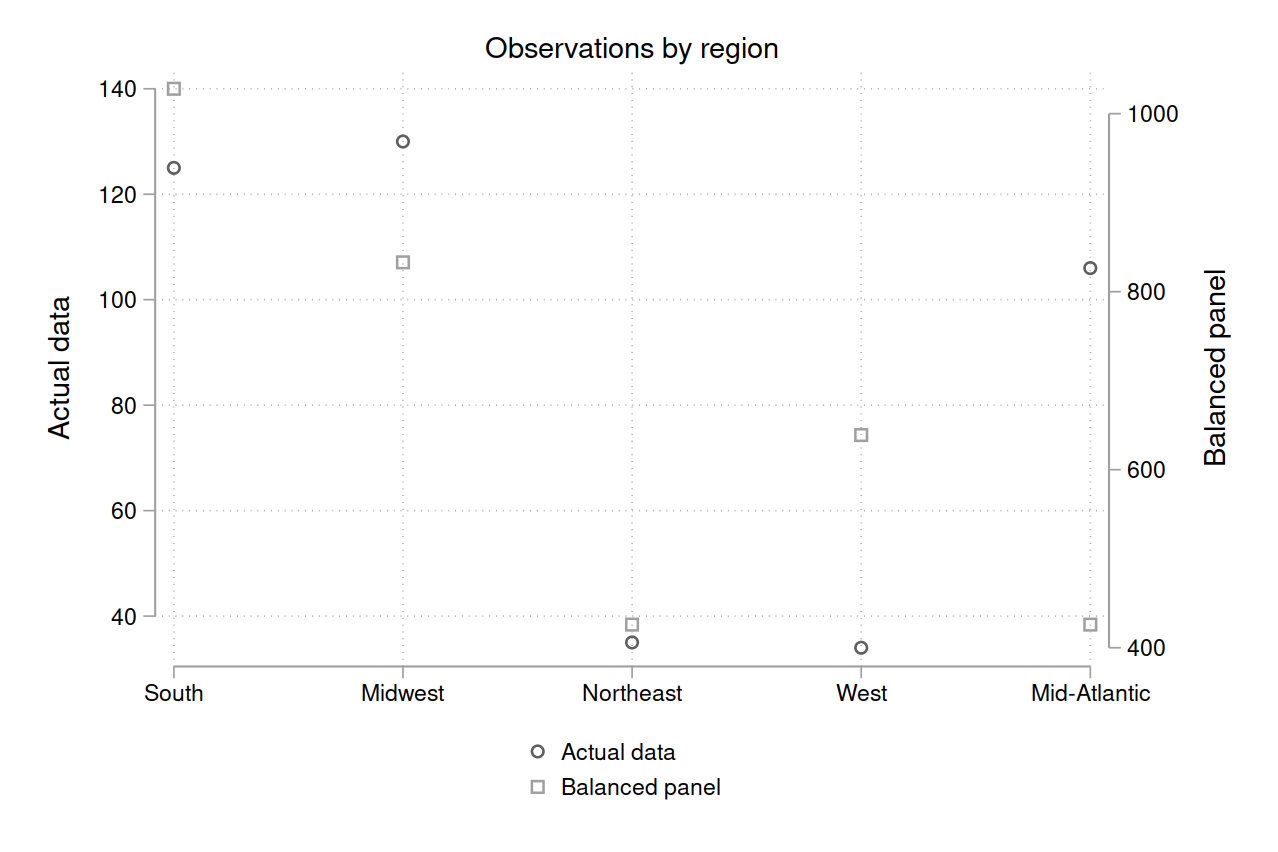 With this low level of data coverage, I’m skeptical of the panel data results in Tables 7 and 8. It’s possible that these results are unbiased, and would remain stable as the missing data was filled in (through a law of large numbers argument). Especially considering the prior plausibility that racial violence and patents are negatively correlated, we should place some weight on this.

But it’s also possible that they’re false positives. And statistically significant results are easy to get when you’re working with small effects and noisy data. For example, let’s check for heterogeneous effects by region; a robust result should be stable across different cuts of the data. From Table 7, I run the Column 1 regression separately for each region:

With only 5 riots in the dataset, it’s no surprise that there’s no estimate for the Midwest, Northeast, or West regions (which had zero riots in this data). The effect size is somewhat similar for the South and Mid-Atlantic, perhaps indicating a more homogeneous effect of riots on patenting.

For segregation laws, the Table 7, Column 1 estimate is -0.1. The effects for the South and West are in the ballpark, at -0.19 and -0.16. But the effects for the Midwest and Mid-Atlantic are positive, massive, and have three stars! But statistical significance doesn’t mean anything here, because the data is noisy. There are 19.33 new segregation laws in the data, with 17 in the South, 1 in the Midwest, 1 in the West, and 0.33 in the Mid-Atlantic (presumably a data error). 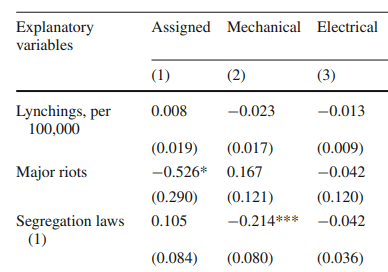 (For comparison, the Table 7, column 1 estimates are: lynchings -0.058***, riots -0.429***, segregation laws -0.1.) The lynching estimates are much smaller than in Table 7, and none are statistically significant.9 The riot estimates have the same sign and similar magnitude only for assigned patents. For segregation laws, the coefficient has the opposite sign for assigned, double the magnitude for mechanical, and half the magnitude for electrical patents. Overall, there is strong heterogeneity in the effects of racial violence, and Cook does not provide a theory to predict the pattern of varying estimates. This heterogeneity is more consistent with noise than a clear causal effect.

My takeaway from these subsample results is that the missing data is causing low statistical power, and we’re seeing Type S and Type M errors. Hence, we shouldn’t place much weight on the correlations in Tables 7 and 8, since they would probably change considerably if we had a complete and balanced panel.

To summarize, the main time series result in Cook (2014) is not robust to using an alternative patent variable, and the panel data results are questionable because of missing data. Nonetheless, the conclusions remain plausible, because they have a high prior probability. Lynchings, race riots, and segregation laws were a severe problem, and it would be astonishing if they didn’t have pervasive effects on the lives of Black people.

But with the data available, it’s unrealistic to think we can statistically detect causal effects. Credible causal inference would require more complete data as well as an identification strategy more convincing than a panel regression (not to mention modelling temporal and spatial spillovers). Descriptive analysis is the most that this dataset can support, and is a valuable contribution in itself, along with the rich qualitative evidence in the paper.

Cook deserves credit for pursuing this important research question and putting in years of effort to collect the patent data. And in fact, recent research, no doubt inspired by Cook, does find that segregation (of the federal government by Woodrow Wilson) and riots (specifically, the Tulsa Race Massacre) had substantial negative effects on Black Americans. I hope that more researchers continue in Cook’s footsteps and bring attention to the consequences of America’s racist history.

In terms of computational reproducibility, Cook’s code has several problems:

There are also a few data errors: